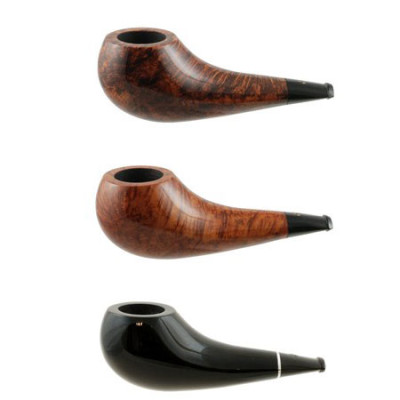 One of the best selling pipes of Big Ben is Pipo. Its story is by all means a particular one. The history of this pipe starts when Alfons Gubbels – son of Elbert Gubbels sr. – is 19 years old. At this young age Alfons joined the family business and creative as he already was, he had the craziest ideas. This time he had the bold idea to design a new pipe model based on a Braun shaving machine. The design Alfons made looked very different from the traditional pipes. The traditional pipes were balanced and the standard expectation for these pipes was 50% bowl and 50% mouthpiece in these days. Alfons’ pipe, on the contrary, was short and characteristic.

When Alfons turned to his father, Elbert Gubbels sr. and his brother – who was responsible for sales – they initially did not fancy the new design at all. They did allow Alfons to order some mouthpieces for the new Pipo pipe when they were on a purchase tour to Hamburg for ordering mouthpieces for other models. But on the way back Elbert Gubbels sr. explained to his son that he had cancelled the order for the Pipo mouthpieces behind his back, as he believed it would be a waste of money. Of course Alfons was very disappointed.

But the story continues. A few days later a group of American customers came to visit the factory and to order pipes. Elbert Sr. wanted to introduce his son Alfons to these overseas customers and told him to enter the room in which the table was covered in pipes that were already selected by the American customers. As Alfons entered, something ‘accidently’ fell out of his pocket. That something was the new Pipo design. The customers were immediately attracted by this special object and after looking at it from every perspective possible they cleared the table and put the Pipo in the centre. All they wanted to talk about from that moment on was the Pipo.

As you can see, exactly that moment the BigBen Pipo was born. It went into limited production, which marked the debut of one of the world’s most successful pipes ever to be manufactured worldwide! Nowadays, after all these years, BigBen Pipo is still one of our best sellers. It is a real classic.

Some specific details on BigBen Pipo:
Since 1956 this pipe has always been produced out of the best quality Briarwood. The mouthpiece has always been made out of ebonite
This pipe has been comfortably shaped for your hands
It fits easily in almost every pocket
This pipe is almost unbreakable
Although this pipe is very small, a reasonable amount of tobacco fits inside
The briarwood that is surrounding the chimney has enough thickness to protect the pipe while using all kind of tobaccos
This registered design of BigBen Pipo has been awarded by the XI European Triennale in Milano